There is no official repeater group for our repeaters but if you would like to make a donation to the Martello Tower Group group to help fund the repeaters then we will be happy to accept it.

Please note that it is not compulsory to make a donation to the group to be able to use our repeaters.  Nobody should feel that they are not welcome because they've not contributed to the upkeep.  The repeaters are there for absolutely everyone to use. The more people who use our repeaters, the happier we are!

If you wish to donate, you can do it via post to the repeater keeper:

Or you can donate via PayPal.  All contributions are gratefully received and will go towards the upkeep of the repeaters and other projects undertaken by the Martello Tower Group.  Donations are not used for special event stations and DXpeditions.

You can see a list of everyone who has donated to help support the Martello Tower Group by clicking here.

There is an unofficial Facebook group for our repeaters which you can join here. 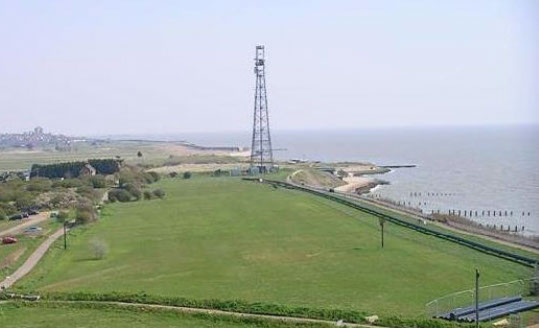 Click here to see a map with the approximate locations of our repeaters.

Repeater etiquette and the Morse character between overs

Repeaters are traditionally for mobile-to-mobile use although the Martello Tower Group have no problems whatsoever with base stations using our repeaters.  We just like to hear activity so please don't think that because you're at home that you shouldn't use the repeaters.  Repeaters are normally centres of activity, let's use them!

If any local groups want to use the repeaters for regular nets, then please go ahead, you don't need to ask for permission from the Martello Tower Group to do this.  It's all about promoting local activity within the Tendring and Colchester areas.

When using the repeater, a Morse code character is transmitted between overs.

The most important reason is that it forces a natural break between overs to allow anyone else to call in and join the conversation.  Repeaters are a centre of activity and can be used for urgent traffic but without this natural break, it can be difficult to get in.  Some operators are very quick to transmit following someone another stations over, often jumping ahead of the Morse code.  This isn't good operating and should be discouraged.

Our repeaters don't have a time-out but please don't abuse this.  If you tend to take long overs, it would be appreciated if you could keep them below three minutes.

Please leave a break between overs, whether it's for the Morse character or the 'ding ding' on GB3CL.

Traditionally, the Morse character on most repeaters is a K.  K is a Prosign for "go ahead" and is normally used at the end of an over when in QSO using Morse which is why the majority of repeaters in the UK send a K between overs - It simply means "go ahead".

Because we operate a number of analogue voice repeaters, many years ago we decided to change them to allow easy identification of the repeater you're listening to, simply by hearing what letter the repeater sends during overs.

GB3TE - TE for TEndring (this sounds like an N but it really is TE, honest)

These different letters have been in place for many years.  They will occasionally be changed but will always end up back as the original letters.

On Saturday 9th December 2017 at 14:05z a brand new GB3CL was installed using a Simoco TSF2025 (the same hardware as GB3TE).  It runs into a six cavity Procom band pass filter with 10 watts ERP from a single section dual band co-linear.

About the 'ding ding' on GB3CL

In the early 1990s, GB3TE used a 'ding ding' in between overs, this was retired after being on the air for many years.

On Friday 7th April 2017, GB3CL was taken off air for what had only been described as "a service".  This 'service' involved a couple of adjustments to CL itself, including correcting a very small frequency error. However, the main reason was to add the bells.   GB3CL returned on Sunday 9th April, complete with the 'ding ding' to the pleasure of many users.  The bells won't be there forever so please enjoy them while you can.  When GB3CL was replaced in December 2017, the bells were moved from being in between overs to part of the ident and transmitted every half an hour.

The bells were recorded onto a Maplin voice recording unit in the 1990s and we're very happy to say that we're still using the same voice board for playback now.  In fact, when G0MBA re-applied power to the board, the bells were still there.

There is one regular net operated on our repeaters, on Monday evenings at 20:00 local time (excluding bank holidays) on GB3CL for about half an hour or so.  This official Martello Tower Group net is controlled by Bill, G1WJR.

All are welcome to join the nets and we look forward to hearing you. 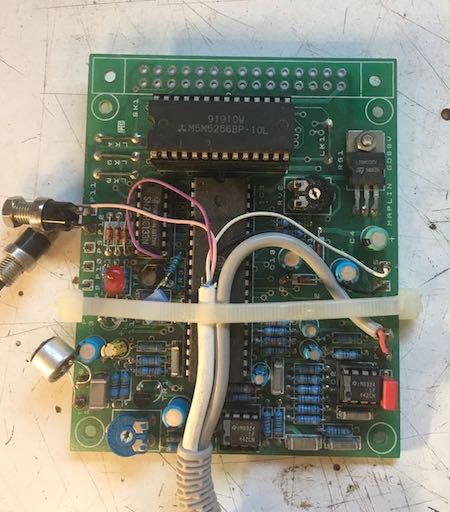 GB3CE was off for a few days over Christmas 2017 while the hardware was upgraded to a Simoco TSF2025 base station running into a six cavity Procom band pass filter with 10 watts ERP from a single section tri band co-linear.  It returned to service on 26th December 2017 at around 13:00z

On the 17th November 2017 at 10:24z, exactly twenty six years to the day after GB3TE first went on air, we installed a new repeater, a Simoco TSF2025 at the Thorpe-le-Soken site replacing the old Pye 494.  We are still using our original  four cavity Telewave band pass filter with 10 watts ERP from a single section dual band co-linear.

GB3TE was first operational on 17th November 1991 from the Martello Tower and moved to the Holland Haven location on 5th August 1994.  It closed down in June 2015 and was returned to activity from the original site on Saturday 29th August 2015.

Because the original site didn't give very good coverage to the main heartland area of GB3TE, we decided again to move it. On the 23rd September 2017 at 16:08z, GB3TE was switched on at a new site very close to Thorpe-le-Soken.  This site is higher ASL than Clacton and is located roughly in the centre of our local area.  We hope that this location will allow good coverage throughout Clacton-on-Sea and the Tendring peninsula.  GB3TE has returned to being a repeater that will cater for the local community.

All of our repeaters use the G8CUL logic.

Our repeaters should be accessed by use of a carrier modulated with a CTCSS tone of the frequency listed above.  GB3CL and GB3TE can still be opened with a 1750 Hz tone burst (or a whistle at the correct frequency).

Once accessed, subsequent talk through can be by just a carrier although it is normal to continue to transmit CTCSS.  If you use a tone burst on CL and TE, you should switch it off once the repeater has been initially opened otherwise the first second or so of your audio may be muted due to the repeater notch filter. 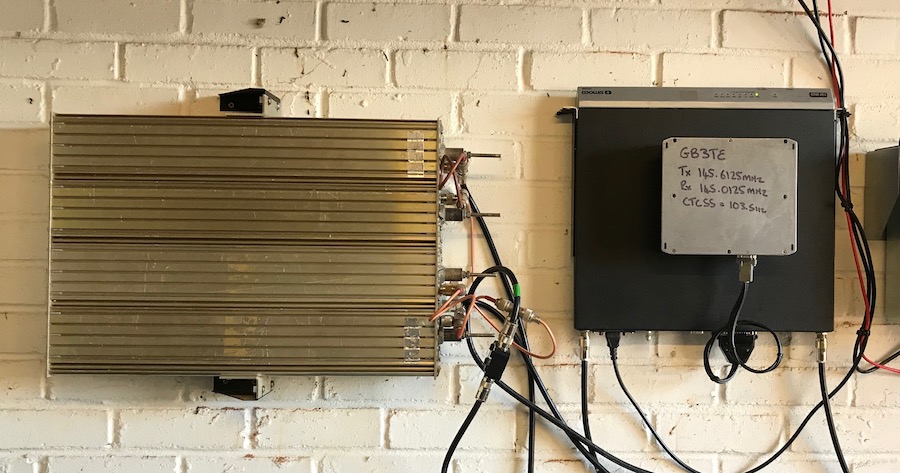